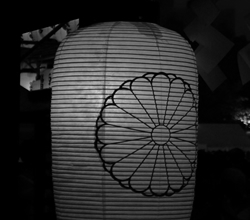 Used as a skylight or held to light up dark roads、these were often hung outside. There aremany ways to write “chochin” such as:「提燈」、「提燈」、「挑灯」、「挑燈」, which the kanji「提」has the meaning “to hold in one’s hand”、then there is the kanji「挑」 meaning “to post”. Inside of chochin there were candles or fish oil, however, as of recent it has been more common for the use of lightbulbs or LED’s. And because of those recent changes and use these days, it is well worth looking back on the rich 400 years that chochin have been around and what they have done for us. At our company, we have everything from classic style to original designs; anything that would best services your interests! Please feel free to give us a call! 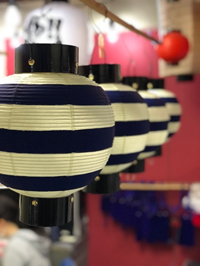 From the Muromachi Period（1336～1555）,when the Chinese brought over their lanterns、they were baskets of bamboo that were covered with paper and much like the “chochin” we have today. These were planned to be used as Buddhist objects that were used in funerals, and other events that had to do with Buddhism.

Near the end of the Muromachi Period（1573～1596）lanterns with the ability to fold up were introduced in Japan. With the use of thin bamboo as the skeleton、they were then able to stretch rice paper onto it. With the ability to now fold up lanterns, it became more involved in everyday life for individuals. Thus they started making their appearance in events like: festivals or the Obon Dance.

Though now-a-days you do not see them being as used in everyday life、they still make appearances in festivals orJapanese Restaurants as decorations. In Japan、during Obon(a Japanese Buddhist custom to honor the spirits of one’s ancestors) it is common to see盆提灯or Obon Chochin being hung about. So that ones ancestors will be able to find their way home, they decorate the chochin with a special seal or design. There are many other types of chochin as well that depending on their use, the appearance change as well. For instance in this picture there is a Round Chochin、for displays at restaurants or advertisement it is common to see Long-round Chochin. The type of chochin that you see in Periodical Plays with handles and names on them are called , Bow-shaped Chochin. There are two types of chochin that are round called: Kabura Chochin or Small Chochin. As of later years there are now rice paper chochin as well as vinyl types. Vinyl types are cheap and easy to make in large number, and strong enough to hang up in the rain. These are most common in restaurants.

Rice paper types are well known for being handmade one-by-one, and have the most traditional feeling to them.

With an original design on your chochin, you can have them for thing from restaurants to apparel shops, and events such as weddings. Here are some Chochin in real use.